Amazon just released a video explaining the concept for a new kind of grocery store, with no queues and no cashiers and no waiting. Here are three thoughts on the implications of the technology and concept.

The idea behind the store seems to be that customers check in with an Amazon account to enter the store, and are then watched by the store itself while they shop. The store determines, using “Computer Vision” and “Deep Learning Algorithms” similar to those in autonomous cars, what each customer picks up. Customers can simply walk out of the store when they are finished, and their Amazon account will be charged. A receipt will be visible on their Amazon app.

The full video is right here:

The technology is really exciting, and the execution is interesting: the store has become one big device, interacting with people and their devices. This is a crushing blow to the idea behind Ubiquitous Computing. Requiring an Amazon account to shop is easy, sure, but if this kind of store becomes the norm this will be an enforced surrender of privacy. Finally, the way the store works may fundamentally change people’s trust in economic transactions.

Those are my three immediate observations. I will cover them briefly below.

A crushing blow to ubiquitous computing #

Ubiquitous computing is the concept of “computing everywhere”. Instead of deliberately sitting down with a computer to do computing-related things, computing will be all around you, the vision says. Not just everywhere but implemented as “everyware”, small software components embedded into everyday things.

One of the canonical examples of ubiquitous computing is the grocery store: imagine if we somehow made all the food intelligent, by putting NFC chips into the packaging, and then automatically charged customers when they left the shop.

This example sounds very similar to the Amazon Go store, except for one key difference: Amazon Go is most definitely not everyware.

If we take away the “small devices all around you” part of the definition of ubiquitous computing, we are left with a kind of vague definition of “computing that magically happens all around you”. But “any sufficiently advanced technology is indistinguishable from magic”, so that leaves us with a definition of ubiquitous computing that says “technology will advance”. No, for the definition to be meaningful (and to justify all the academic work that has been done in the field) it must be more concrete, and so the everyware part must be left in.

And Amazon Go is not everyware.

You may not actually have heard of Ubiquitous Computing (or Pervasive Computing, as it is also known), but I’ll bet you’ve heard of the Internet of Things (IoT), the term for decentralized-small-components du jour. It turns out that the concept is very similar.

In Internet of Things we dream of small interconnected devices. Each device is supposed to be intelligent and communicative, not just a dumb sensor — that’s where IoT differs from just having sensors and cameras in your house. The canonical example is the Smart Home that does things for the owner without the owner interacting. Temperature drop? Turn up the heating. Someone ringing the doorbell? Video call the owner’s phone. House empty? Turn off the lights and turn down the temperature.

I wrote a paper some years ago for a university assignment called Do we want our computers to be Everyware? in which I argued that people have a natural tendency to want devices, computers with lots of functionality in a single thing. We have seen this with laptops, smartphones, smartwatches, etc. I think this is still true. [The paper is not the most well-written thing I have ever produced, but you should be able to make out the point.]

I am a fan of decentralized computing on a global scale, but I honestly do not believe in it on the scale of a house or a store. What might make sense, however, and what Amazon has done with Go, is looking at the entire house or store as a single device. It has sensors, sure, but the primary computation has to happen on a store-level. This is not interconnected intelligent things, it is one big thing.

I believe this is more likely to be the future than either Ubiquitous Computing or Internet of Things. This is closer to the right direction.

Is all the work in ubicomp and IoT wasted? Of course not! We have great little sensors now. But maybe if we course correct we will stop trying to build intelligent fridges. Who the hell even buys those… 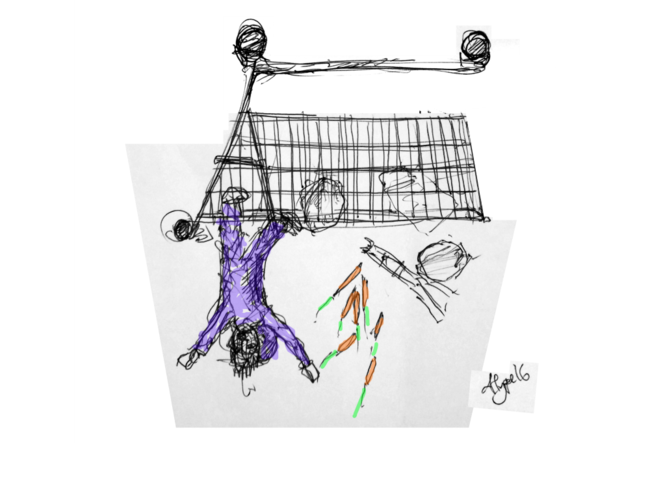 Amazon is a Big Corporation™ and it thrives off the collection of data from customers, building profiles of needs and wants. Amazon probably knows more about you than you know about yourself.

Aral Balkan has an interesting talk about the definition of a person (and by extension their rights): if a company’s profile of you has more data than you do yourself, how is it any less real? This talk is a great starting point for discussing human rights in the digital age.

The concept Amazon is presenting is really very appealing to any profit-conscious store. Saving the wages for employees is not a small benefit. Additionally, Amazon promises higher throughput of customers per square meter, which means smaller shops can accommodate larger numbers of customers. This concept, once proven, is likely to be adopted by many other shops.

The adoption will probably happen seamlessly, without many people noticing. One day we will wake up and realize most shops work like this.

Wait, what does that mean?

Today it is possible to live without social media and online shopping – without all those companies that track you; maybe not the most comfortable, but at least reasonably survivable. With the introduction of membership-only shops, this goes away.

In the future, good luck trying to buy anything without a Big Corporation™ account.

Stores without queues and waiting and paying are going to spread. In fact, Amazon are not the first to explore this model. FutureProof Retail provide a model that takes a step in the right direction, and did a good write-up on how the market looks. They wrote:

WalMart’s Sam’s Club Scan & Go rolled out this year to a great reception, with a similar rollout expected at WalMart proper next year. We at FutureProof launched the first store in the US to open with line free checkout in November, San Luis Obispo’s California Fresh Market.

What seems to make Amazon Go unique is the invisibility. With FutureProof Retail each item must be scanned. In Amazon Go, Computer Vision automatically adds the item to the customer’s cart.

This invisibility brings into the equation a new level of trust, from customer to retailer. The customer has to trust that the Deep Learning works well enough to not make mistakes. If it works well enough, though, this lack of trust will only be a temporary problem. If it makes few enough mistakes, it will soon enough become the norm.

There’s another level of trust, too: in a normal grocery store with a traditional checkout line, the sum total to be paid is displayed on a screen before payment happens, and a receipt is given to the customer to allow for verification. Both of these methods of verification have changed with Amazon Go.

My parents always check the receipt to verify that nothing has gone wrong with their purchase, that they haven’t been overcharged. I never do this. I look at the total to be paid, and assess whether it looks outrageous or not. Usually it doesn’t. This example is to illustrate that trust may already be moving in this direction, of more trust in a system.

What is interesting, is that Amazon Go completely removes both verification steps. (Actually, the customer can check their receipt on their phone once they leave, but this becomes a much more cumbersome and deliberate check than the current norm.)

What consequences will this have for purchases in general? Will we start trusting companies more blindly, assuming they deduct the correct amount of credits from our accounts? Might this ultimately make economic transactions less transparent?

I don’t know… but it’s interesting to consider, isn’t it?

All in all, Amazon Go does a lot of really cool new things. Much will change as a result, and not necessarily for the better. We should probably all be thinking about how to ensure it goes in as good a direction as possible!

Are there any other interesting consequences that may follow from Amazon Go? I’d love to hear your thoughts!

I write stuff on a pretty regular basis, and you can follow along by signing up to my newsletter.

Last week, I wrote about routing in web frameworks, specifically arguing for decentralized routing over centralized routing. Through writing that blog post, I stumbled upon a more general point, which I will try to explore here. The... Continue →